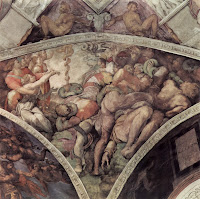 Intro:
Are you a complainer? Is your life marked by negativity?

I can certainly get that way quickly if I have expectations that are unmet.

I was late to a meeting and found myself complaining about the lame, slow driving of practically everyone around me. Didn't they know I was in a hurry? Didn't they know I had a ministry leadership meeting at church to get to? Sad but true, people! Still have some growing up to do!

Take time to study this picture of Michelangelo's rendering of Moses and the bronze snake.

If you click the picture it should enlarge. Note the snakes that are moving among the people on the right. Notice where those people are looking. Contrast their faces to the folks on the left side of the picture.

Seems rough for a bunch of folks that were only complaining! (sarcasm implied)

4-9 The people of Israel set out from Mount Hor, taking the road to the Red Sea to go around the land of Edom. But the people grew impatient with the long journey, and they began to speak against God and Moses. “Why have you brought us out of Egypt to die here in the wilderness?” they complained. “There is nothing to eat here and nothing to drink. And we hate this horrible manna!”

So the Lord sent poisonous snakes among the people, and many were bitten and died. Then the people came to Moses and cried out, “We have sinned by speaking against the Lord and against you. Pray that the Lord will take away the snakes.” So Moses prayed for the people.

Then the Lord told him, “Make a replica of a poisonous snake and attach it to a pole. All who are bitten will live if they simply look at it!” So Moses made a snake out of bronze and attached it to a pole. Then anyone who was bitten by a snake could look at the bronze snake and be healed!

14-17 As Moses lifted up the bronze snake on a pole in the wilderness, so the Son of Man must be lifted up, so that everyone who believes in him (looks at him) will have eternal life.

For God loved the world so much that he gave his one and only Son, so that everyone who believes in him will not perish but have eternal life. God sent his Son into the world not to judge the world, but to save the world through him.

Think:
How many of us have John 3:16 memorized? Ok, how many knew that Numbers 21 was the context for this most famous of verses?

I remember the day I actually studied the passage for myself. I had probably memorized it 10 years before this. The context makes it rich with meaning. I've come to learn that there are many, many other contexts like this in the Bible.

I heard Chuck Swindoll once say, "I feel bad for some verses, verses like John 3:17". That's pretty funny! They never get picked on the team, rarely memorized and often overlooked. This is certainly true for John 3:14 as well.

The people were bitten by snakes for their grumbling and really for ungratefulness. Though God does not often judge folks immediately for their sin, He did on this occasion.

Do you like it when your kids grumble and are ungrateful? I sure don't. They can sound like these Israelites. Funny thing, the bread from heaven in the OT is called "manna" which is Hebrew for, "what is it?". I've heard my kids whisper such things when dinner is anything much beyond hot dogs and mac-n-cheese.

Now, when my kids grumble and show disrespect I will discipline them for it. I wouldn't put them in a room with snakes though! God's judgment seems harsh and even uneven. Yet we do well to remember that a larger gap exists between God and us then we wish to remember. We tend to not think ungratefulness as serious a crime as He does. I mean, how in the world does it make the nasty sin list of 2 Timothy 3:1-5?

So, Numbers 21 tells the story of our ultimate redemption.

That's Jesus in the OT!

We have the same opportunity when we come to Christ the first time. We need to work through these same 5 steps. Have you ever done that? Have you looked to Jesus Christ and found life?

Finally, let's take a grumbling inventory. Are you a complainer? I am ... at least my wife would say I am at times! Take stock of your words today. See what comes out of you. See if you have a complaining spirit. Let's make a pledge to only speak what is encouraging today. Let's see how that goes.

DevoLink: Devotions to help you Link with God.
Posted by DevoLink at 5:14 AM