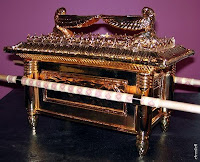 Intro:
I got to see U2 twice this year. One time in Atlanta and one time in Los Angeles. Same band. Same concert. Same effects. Different experiences.

In the Atlanta we were in the seats far from the stage. Bono looked no bigger than a Ken or Barbie doll. Pretty disappointing.

In LA I made sure we got on the floor level. Bono was, well Bono. We were 10 people from the outer stage ... got real close.

You can see how close we were here!*
*right click the link and select "Open in New Window"

Proximity matters ... I know from experience.

The LORD Calls Samuel
1 The boy Samuel ministered before the LORD under Eli. In those days the word of the LORD was rare; there were not many visions. 2 One night Eli, whose eyes were becoming so weak that he could barely see, was lying down in his usual place. 3 The lamp of God had not yet gone out, and Samuel was lying down in the temple of the LORD, where the ark of God was.

7 Now Samuel did not yet know the LORD : The word of the LORD had not yet been revealed to him.

8 The LORD called Samuel a third time, and Samuel got up and went to Eli and said, "Here I am; you called me." Then Eli realized that the LORD was calling the boy. 9 So Eli told Samuel, "Go and lie down, and if he calls you, say, 'Speak, LORD, for your servant is listening.' " So Samuel went and lay down in his place.

10 The LORD came and stood there, calling as at the other times, "Samuel! Samuel!"
Then Samuel said, "Speak, for your servant is listening."

Think:
Proximity is everything.

I know many Christians (myself included) that can get discouraged by not seeing much of the Lord during the day. But I remind myself that proximity is everything. The closer I am to where the Lord is working and to what is important to Him the more likely I will see Him.

The boy Samuel is sleeping IN the temple where the "ark of God" was (v.3). The ark was God's Starbucks. It was the place to meet with Him. God told Moses, "There, above the cover between the two cherubim that are over the ark of the Testimony, I will meet with you and give you all my commands for the Israelites" (Ex. 25:22).

Eli, the high-priest is sleeping in his "usual place". For him the mystique is gone. The word of the Lord was rare. Eli lost focus and drifted away. Remember, proximity is everything!

The Scriptures paint Eli as blind and heavy. Both words are metaphors for his spiritual condition. Eli was over indulgent and lacking eyes for the Lord. He is so thick at this point that it takes him 3x to realize that it was the Lord speaking to the boy!

I wonder how thick I am, don't you? Speak Lord for your servant is listening!


Proximity has its reward.

Samuel gets a chance to talk with the Lord. Not some mysterious voice. Not some flame burning between the angels on top of the ark. Not some mystical dream. The Bible tells us that the LORD "came and stood there calling as at the other times".

That's Jesus in the OT! That's God with skin on!

Do:
I see two lessons here for us today.

The first is pretty obvious: what choices do I need to make to make sure that I am in the right place with the Lord? In other words, what is my proximity? Is there anything that stands in the way of my walk with the Lord? Am I too busy? Am I too distracted? Am I allowing sin to control me? Am I living in "usual places" and not expecting to hear from the Lord? Am I daily in the Word and prayer?

"We are all agreed that God's word must be your daily meditation ... and that we must be constant, fervent and importunate in prayer. Do you perform this much faithfully or not? If you do, you may all the more confidently expect God should further reveal his will to you and resolve your doubts and guide you in the way that is pleasing to him. But if you omit the duty that all are agreed on and be unfaithful and negligent in what you know, how unmeet you are" to have God further reveal himself to you.

Stop and pray through these things. Listen for God to offer some of His own.

Second, we can be a conduit of blessing for our children but God might speak to them in spite of us. Better to be a resource for our kids rather than the example of what not to be! Eli missed the joy of being part of his adopted son's walk with the Lord. He missed hearing God speak. He did not lead.

Proximity is everything. If we will choose to hang out in the Lord's room we will get to hear Him when He decides to talk. We will also be more equipped to lead our children in the Lord.

Samuel met Jesus in the OT. How much more can we know Him now? Where are you right now? Proximity is everything!

DevoLink: Devotions to help you Link with God.
Posted by DevoLink at 5:11 AM