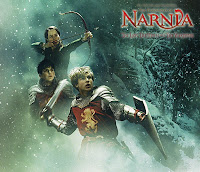 Intro:
Two kingdoms collide in the Lion, the Witch and the Wardrobe. The witch and her minions take on Aslan and his over powered team.

The witch is a cunning and cruel thing that hates the true King of Narnia and all that would seek to follow Him.

Read: Revelation 17
The Woman and the Beast
1One of the seven angels who had the seven bowls came and said to me, "Come, I will show you the punishment of the great prostitute, who sits on many waters. 2With her the kings of the earth committed adultery and the inhabitants of the earth were intoxicated with the wine of her adulteries."
3Then the angel carried me away in the Spirit into a desert. There I saw a woman sitting on a scarlet beast that was covered with blasphemous names and had seven heads and ten horns. 4The woman was dressed in purple and scarlet, and was glittering with gold, precious stones and pearls. She held a golden cup in her hand, filled with abominable things and the filth of her adulteries. 5This title was written on her forehead:
MYSTERY
BABYLON THE GREAT
THE MOTHER OF PROSTITUTES
AND OF THE ABOMINATIONS OF THE EARTH. 6I saw that the woman was drunk with the blood of the saints, the blood of those who bore testimony to Jesus.

When I saw her, I was greatly astonished. 7Then the angel said to me: "Why are you astonished? I will explain to you the mystery of the woman and of the beast she rides, which has the seven heads and ten horns. 8The beast, which you saw, once was, now is not, and will come up out of the Abyss and go to his destruction. The inhabitants of the earth whose names have not been written in the book of life from the creation of the world will be astonished when they see the beast, because he once was, now is not, and yet will come.

9"This calls for a mind with wisdom. The seven heads are seven hills on which the woman sits. 10They are also seven kings. Five have fallen, one is, the other has not yet come; but when he does come, he must remain for a little while. 11The beast who once was, and now is not, is an eighth king. He belongs to the seven and is going to his destruction.

12"The ten horns you saw are ten kings who have not yet received a kingdom, but who for one hour will receive authority as kings along with the beast. 13They have one purpose and will give their power and authority to the beast. 14They will make war against the Lamb, but the Lamb will overcome them because he is Lord of lords and King of kings—and with him will be his called, chosen and faithful followers."

15Then the angel said to me, "The waters you saw, where the prostitute sits, are peoples, multitudes, nations and languages. 16The beast and the ten horns you saw will hate the prostitute. They will bring her to ruin and leave her naked; they will eat her flesh and burn her with fire. 17For God has put it into their hearts to accomplish his purpose by agreeing to give the beast their power to rule, until God's words are fulfilled. 18The woman you saw is the great city that rules over the kings of the earth."

Think:
Iraq represents the center of end times prophecy. This is the land of Babylon. In fact, Saddam was working to recreate that great center of civilization. The Tigris and Euphrates rivers also run through this land. Several of the destroying angels come out of these rivers.

Horns and heads. They represent the leadership and authority of kings. Here we see that several kings will come and go. Their powers will not be equal. Some are strong and some are weak. Some last long while others have short terms.

These kings have one thing in common though .... they follow the beast and will give their power to the beast (v. 13). They will be drunk with power. Many have used this passage and others to point out that the earth will move toward a "one world government". Many believers felt this would come through the United Nations. That remains to be seen. There is also talk about a "one world currency", something China called for last week.

Regardless of the power of these kings to kill believers and rule the earth for a time, they will lose to the Lamb! The Lamb is the King of all kings and the Lord of all lords. He will fight them alongside an army of believers.

Do:
Is your name written in the Lamb's Book of Life (v. 8)? Are you part of his team of believers?

Do you have wisdom to discern what is coming (v. 9)? Don't be a conspiracy theorist. You don't have to declare the UN a tool of the devil. It might be a tool of the devil for other, more practical reasons BUT that does not mean it is the tool he will use to bring about a one world government. Be aware of your surroundings. Pay attention to the "one world" language in the news. Be in prayer.

DevoLink: Devotions to help you Link with God.
Posted by DevoLink at 1:24 AM