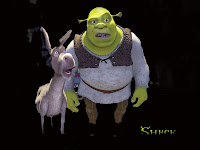 Intro:
Donkey's are stubborn. They are willed like few other animals that God created. I know from experience. As a kid I got to ride to the bottom of the Grand Canyon with my family. The trip was long so dad rented donkeys to help the descent. It didn't take long before I realized that this donkey was not going follow orders! Stupid, senseless beast of burden. Irritating talking donkey. That's how Shrek summed it up.

Donkey's are stubborn and so am I. Still have a long way to grow!

9 Do not be like the horse or the mule, which have no understanding but must be controlled by bit and bridle or they will not come to you.

Read: Revelation 16
The Seven Bowls of God's Wrath
1Then I heard a loud voice from the temple saying to the seven angels, "Go, pour out the seven bowls of God's wrath on the earth." 2The first angel went and poured out his bowl on the land, and ugly and painful sores broke out on the people who had the mark of the beast and worshiped his image.
3The second angel poured out his bowl on the sea, and it turned into blood like that of a dead man, and every living thing in the sea died.

4The third angel poured out his bowl on the rivers and springs of water, and they became blood. 5Then I heard the angel in charge of the waters say:
"You are just in these judgments,
you who are and who were, the Holy One,
because you have so judged;
6for they have shed the blood of your saints and prophets,
and you have given them blood to drink as they deserve."

7And I heard the altar respond:
"Yes, Lord God Almighty,
true and just are your judgments."

8The fourth angel poured out his bowl on the sun, and the sun was given power to scorch people with fire. 9They were seared by the intense heat and they cursed the name of God, who had control over these plagues, but they refused to repent and glorify him.

10The fifth angel poured out his bowl on the throne of the beast, and his kingdom was plunged into darkness. Men gnawed their tongues in agony 11and cursed the God of heaven because of their pains and their sores, but they refused to repent of what they had done.

15"Behold, I come like a thief! Blessed is he who stays awake and keeps his clothes with him, so that he may not go naked and be shamefully exposed."

16Then they gathered the kings together to the place that in Hebrew is called Armageddon.

17The seventh angel poured out his bowl into the air, and out of the temple came a loud voice from the throne, saying, "It is done!" 18Then there came flashes of lightning, rumblings, peals of thunder and a severe earthquake. No earthquake like it has ever occurred since man has been on earth, so tremendous was the quake. 19The great city split into three parts, and the cities of the nations collapsed. God remembered Babylon the Great and gave her the cup filled with the wine of the fury of his wrath. 20Every island fled away and the mountains could not be found. 21From the sky huge hailstones of about a hundred pounds each fell upon men. And they cursed God on account of the plague of hail, because the plague was so terrible.

Think:
When I read this passage I see a pattern: these people are stubborn! They will not turn to the Lord. Like a teenager with a bad attitude toward authority so are the people on the earth. They hate God and curse Him.

If you will recall, the Israelites were just as stubborn. During their years in the wilderness they would come near to God (aka go to Temple) but their hearts were far from God. Jeremiah and the other prophets warned them repeatedly to repent and follow the Lord from the heart. Usually this went unheeded because they were stubborn.

This chapter begins the battle of Armageddon, which means "the hill or city of Megiddo. Megiddo was a city where many battles took place. Most notibly, it is the place that both King Saul and King Josiah were killed in battle. Clearly the name is a warning to the kings of the earth that they will meet their end in this final battle.

Do:
How is your heart toward the Lord? Are you guilty of drawing near him with your lips but leaving your heart somewhere else? I'm like that! There are times at church that I am more distracted by the singers than I am focused on the Lord. I will sometimes catch myself singing words but having my mouth on auto-pilot. Can you relate to that?

How stubborn are you? Stubborn means an unwillingness to move or be moved. Does that describe you before the Lord? Is there any place, anyone or anything that God is not allowed to control in your life? If he tells you to "Go" will you go? If he asks you to give up a pet sin, will you? If he calls on you to share Christ with a co-worker or neighbor, do you?


DevoLink: Devotions to help you Link with God.
Posted by DevoLink at 1:23 AM