Surprised by the Resurrection 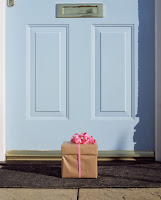 I wasn’t supposed to be the Bible Teacher at that summer camp. I worked hard to get out of it. I was scared to death. I’d never taught in front of hundreds of kids before. No way! But God was at work. He surprised us in many wonderful ways that summer. In 10 weeks of camp 700+ kids made professions of faith in Jesus. It was crazy. The camp hadn’t seen that kind of God movement in over 10 years! We were all surprised!

The surprises weren't over at that camp .... I met Deborah! This awesome woman and I became friends and now she is my wife! That was a great surprise!

Today we look at the actual first folks that discovered Jesus raised from the dead. The material is familiar so be careful when reading it. You might want to read it out loud.

Read: Matthew 28:1-10
Now after the Sabbath, as it began to dawn on the first day of the week, Mary Magdalene and the other Mary came to see the tomb. 2Behold, there was a great earthquake, for an angel of the Lord descended from the sky, and came and rolled away the stone from the door, and sat on it. 3His appearance was like lightning, and his clothing white as snow. 4For fear of him, the guards shook, and became like dead men. 5The angel answered the women, “Don’t be afraid, for I know that you seek Jesus, who has been crucified. 6He is not here, for he has risen, just like he said. Come, see the place where the Lord was lying. 7Go quickly and tell his disciples, ‘He has risen from the dead, and behold, he goes before you into Galilee; there you will see him.’ Behold, I have told you.”
8They departed quickly from the tomb with fear and great joy, and ran to bring his disciples word. 9As they went to tell his disciples, behold, Jesus met them, saying, “Rejoice!”
They came and took hold of his feet, and worshiped him.
10Then Jesus said to them, “Don’t be afraid. Go tell my brothers that they should go into Galilee, and there they will see me.”

Think:
Have you ever noticed that we tend to hear what we expect to hear? We tend to hear only in categories that we expect to hear on. For months Jesus warned the disciples that he would be killed and raised from the dead but they couldn’t hear it (v.6). He even told them that he would rise after 3 days. They wouldn’t hear it.

On the 3rd day some women visited the tomb early in the morning. Why were they going to the tomb? Was it to see if the resurrection had happened? No. The Gospel of Mark tells us they were going to the tomb with spices to “anoint the body of Jesus”. There was no expectation of finding Jesus alive. In fact, there was no expectation of finding anything out of the ordinary.

What they got was the shock of their lives. They got surprised. Angels, earthquakes, an empty tomb, the declaration of Jesus being alive ….. they were surprised! Overwhelmed, they run off to tell the others. As if this day did not have enough shock, they run right into their risen Jesus (v. 9). Surprise!

These women would never have worshiped Jesus if they did not believe he was God. Jews worship God only. It is a point of national pride for them. Interestingly, Jesus accepted their worship. There is no evidence that he tried to stop them. He could never and would never have done that if he were not God.

The resurrection is God’s ultimate statement on the person of Jesus Christ. He was God in the flesh. He is God raised. He is the God that surprises us with life.

Do:
Have you ever been surprised by God? Have you ever met Him in places you didn’t expect? From a prostitute downtown to a praying Christian at home, God has the right and the desire to surprise. He is alive. He wants to surprise us. The question is, can we hear Him? Do we expect Him to act? Surprise us Lord!

How in awe are you of Jesus? This Easter we celebrate the greatest act of love in history. What will your worship look like? I pray that you will not be distracted by the clothes people wear at church or how good the music is or whether the pastor’s tie was nice, etc. Get dresses and good clothes for your kids this Easter but do not allow that to take time away from your worship of this risen King.

We’d be better off praying and worshiping the Lord at home than rushing off to the mall to get clothes to wear to church. We’d be better off in rags then getting all fancied up, going to church and sharing a big meal together but never being surprised by Jesus.

As they went to tell others, behold Jesus met them (v.9). When you go to church on Sunday look for Him. He’ll be with you where you least expect Him ... at your bedside, in the car, at church …. Be surprised!

DevoLink: Devotions to help you Link with God.
Posted by DevoLink at 12:59 AM