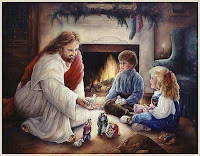 Intro:
What does it mean to let my heart "prepare Him room"? How does that happen?

Christmas is a good time to think through God's desire to live IN people. Jesus was the God Man. He was 100% God and 100% Man co-mingling without confusion.

As Christains, we believe that God is able to live inside of us because of the work of Jesus and the presence of the Holy Spirit. Jesus comes to take place in our hearts. He is Lord of the heart and desires to have room to grow in there.

How does that happen?

1 In the thirty-sixth year of Asa's reign Baasha king of Israel went up against Judah and fortified Ramah to prevent anyone from leaving or entering the territory of Asa king of Judah.
2 Asa then took the silver and gold out of the treasuries of the LORD's temple and of his own palace and sent it to Ben-Hadad king of Aram, who was ruling in Damascus. 3 "Let there be a treaty between me and you," he said, "as there was between my father and your father. See, I am sending you silver and gold. Now break your treaty with Baasha king of Israel so he will withdraw from me."

4 Ben-Hadad agreed with King Asa and sent the commanders of his forces against the towns of Israel. They conquered Ijon, Dan, Abel Maim and all the store cities of Naphtali. 5 When Baasha heard this, he stopped building Ramah and abandoned his work. 6 Then King Asa brought all the men of Judah, and they carried away from Ramah the stones and timber Baasha had been using. With them he built up Geba and Mizpah.

7 At that time Hanani the seer came to Asa king of Judah and said to him: "Because you relied on the king of Aram and not on the LORD your God, the army of the king of Aram has escaped from your hand. 8 Were not the Cushites and Libyans a mighty army with great numbers of chariots and horsemen ? Yet when you relied on the LORD, he delivered them into your hand. 9 For the eyes of the LORD range throughout the earth to strengthen those whose hearts are fully committed to him. You have done a foolish thing, and from now on you will be at war."

10 Asa was angry with the seer because of this; he was so enraged that he put him in prison. At the same time Asa brutally oppressed some of the people.

Think:
I'll bet most of us would not choose the Book of Chronicles as "one of our favorites" in the Bible. It doesn't seem as practical as the Book of Corinthians. Yet there are nuggets on every page in Chronicles. God speaks in the OT and the NT!

Asa was stuck in a tight spot. He was being attacked by his brother in law. Israel was related to Judah but at odds. They were brothers at war. When Asa had finally had enough he took matters into his own hands. He struck up a bargain with a neighboring king. He made a treaty.

Asa was a man of action. He was not going to be denied. But, he made a fatal flaw, he turned to the King of Aram not to the Lord. The test revealed that he his heart was not near the Lord.

I see myself in King Asa. He's not a bad guy. He wants to do what it right most of the time. But when the pressure was on he turned to other sources than the Lord for help! Too easy to do. It is really easy to get angry or turn inward. Too easy to turn to others to find relief. Too easy be practical.

It sounds like this: "The Lord does not care about this small issue. The Lord is not able to help here. I will act and see what happens. I cannot wait. I must find help now."

When the Lord caught up with Asa He challenged his heart. He revealed that he had to prepare some room.

The Lord gave me this passage early Sunday morning after a relational squabble with my brother in law at the Christmas cabin. God wanted tested to see what was in my heart. I still have a lot of growing up to do. I still have to prepare Him room.

Do:
Pride is such a heart killer. It makes us turn to wrong things and turn on people. The Lord wants to examine our hearts today to see if we will give in and trust Him.

We need Awareness and we need Willingness. So, now you are aware that God wants all of your heart ... are you willing to give it?

DevoLink: Devotions to help you Link with God.
Posted by DevoLink at 3:57 AM