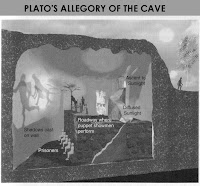 Intro:
Merry Christmas!!! This is not a celebration of Winter ... though many are getting more than their share of cold this year! This is the time we celebrate the Light that came into the world.

6 There came a man who was sent from God; his name was John. 7 He came as a witness to testify concerning that light, so that through him all men might believe. 8 He himself was not the light; he came only as a witness to the light. 9 The true light that gives light to every man was coming into the world.

14 The Word became flesh and made his dwelling among us. We have seen his glory, the glory of the One and Only, who came from the Father, full of grace and truth.

Think:
490 years before Jesus was born, Socrates was talking about our need for light. I think there are many interesting things here worth considering.

Socrates begins by describing a scenario where what people take to be real would in fact be an illusion. He asks Glaucon to imagine a cave inhabited by prisoners who have been chained and held immobile since childhood: not only are their arms and legs held in place, but their heads are also fixed, compelled to gaze at a wall in front of them. Behind the prisoners is an enormous fire, and between the fire and the prisoners is a raised walkway, along which people walk carrying things on their heads "including figures of men and animals made of wood, stone and other materials". The prisoners can only watch the shadows cast by the men, not knowing they are shadows. There are also echoes off the wall from the noise produced from the walkway.

Socrates asks if it is not reasonable that the prisoners would take the shadows to be real things and the echoes to be real sounds, not just reflections of reality, since they are all they had ever seen or heard. Wouldn't they praise as clever whoever could best guess which shadow would come next, as someone who understood the nature of the world? And wouldn't the whole of their society depend on the shadows on the wall?

Release from the cave
Socrates next introduces something new to this scenario. Suppose that a prisoner is freed and permitted to stand up. If someone were to show him the things that had cast the shadows, he would not recognize them for what they were and could not name them; he would believe the shadows on the wall to be more real than what he sees.

"Suppose further," Socrates says, "that the man was compelled to look at the fire: wouldn't he be struck blind and try to turn his gaze back toward the shadows, as toward what he can see clearly and hold to be real? What if someone forcibly dragged such a man upward, out of the cave: wouldn't the man be angry at the one doing this to him? And if dragged all the way out into the sunlight, wouldn't he be distressed and unable to see "even one of the things now said to be true," viz. the shadows on the wall?

After some time on the surface, however, Socrates suggests that the freed prisoner would acclimate. He would see more and more things around him, until he could look upon the Sun. He would understand that the Sun is the "source of the seasons and the years, and is the steward of all things in the visible place, and is in a certain way the cause of all those things he and his companions had been seeing"

Return to the cave
Socrates next asks Glaucon to consider the condition of this man. "Wouldn't he remember his first home, what passed for wisdom there, and his fellow prisoners, and consider himself happy and them pitiable? And wouldn't he disdain whatever honors, praises, and prizes were awarded there to the ones who guessed best which shadows followed which? Moreover, were he to return there, wouldn't he be rather bad at their game, no longer being accustomed to the darkness? "Wouldn't it be said of him that he went up and came back with his eyes corrupted, and that it's not even worth trying to go up? And if they were somehow able to get their hands on and kill the man who attempts to release and lead up, wouldn't they kill him?"

Do:
Let me make 3 points:
1. People need to escape the cave, climb to the surface and see the light of the Son!
2. Seeing the Light changes our desire for the praise and awards of those that still live in the cave. Why would you want to receive the awards and recognition of those that only see shadows cast on a wall?
3. Folks don't like thinking they are in the dark. 490 years before Jesus was born Socrates noted that some of the cave dwellers would seek to kill the Light messenger. That is exactly what they did 30 years after He was born in a manager.

Praise! We get to celebrate the Light that came into the world!!!

DevoLink: Devotions to help you Link with God.
Posted by DevoLink at 6:16 AM