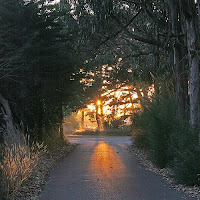 
"One road leads to home and a thousand roads lead into the wilderness."

My dog can get out of here in at least 4 ways. I am not sure he will return if he ever gets away either. He's not untrained, he just forgets himself in his pursuit of other dogs.

Have you ever wandered from home?

Read: Luke 15:11-24
Jesus told them this story: “A man had two sons. 12 The younger son told his father, ‘I want my share of your estate now before you die.’ So his father agreed to divide his wealth between his sons.

13 “A few days later this younger son packed all his belongings and moved to a distant land, and there he wasted all his money in wild living. 14 About the time his money ran out, a great famine swept over the land, and he began to starve. 15 He persuaded a local farmer to hire him, and the man sent him into his fields to feed the pigs. 16 The young man became so hungry that even the pods he was feeding the pigs looked good to him. But no one gave him anything.

17 “When he finally came to his senses, he said to himself, ‘At home even the hired servants have food enough to spare, and here I am dying of hunger! 18 I will go home to my father and say, “Father, I have sinned against both heaven and you, 19 and I am no longer worthy of being called your son. Please take me on as a hired servant.”’

20 “So he returned home to his father. And while he was still a long way off, his father saw him coming. Filled with love and compassion, he ran to his son, embraced him, and kissed him. 21 His son said to him, ‘Father, I have sinned against both heaven and you, and I am no longer worthy of being called your son.’

22 “But his father said to the servants, ‘Quick! Bring the finest robe in the house and put it on him. Get a ring for his finger and sandals for his feet. 23 And kill the calf we have been fattening. We must celebrate with a feast, 24 for this son of mine was dead and has now returned to life. He was lost, but now he is found.’ So the party began.

Think:
When this boy left his home, his heart turned away before his body did. As his heart began to drift he began to dream about roads away from home. There were thousands of them. They look good initially but they all lead to the wilderness.

Maybe you have or know someone who had a child wander away from home. I know of a dear couple who's son got into drugs and began a journey away from home that is 15 years in the making. He is in the wilderness.

There is only One road home and it is not a road it is a Person. When you turn to Him He will see you immediately and run to you. He will embrace you while you are still dirty and throw a party for you. You are always welcome at home.

Do:
Are you on a road that is leading you away from home? Is there some sin or distraction that is leading you from the safety of home and into the wilderness? If so, what can you do about it? I suggest you talk with a friend and tell them what's going on.

How gracious is our God? How awesome is He to forgive when we wander? The old hymn says, "Prone to wander, Lord I feel it, prone to leave the God I love. Here's my heart Lord, take and seal it, seal it for Thy courts above."

These things will help your heart stay at home and potentially keep you off the thousand roads that lead to the wilderness.

DevoLink: Devotions to help you Link with God.
Posted by DevoLink at 11:40 AM