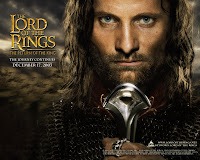 Intro:
The Lord of the Rings captures the epic battles seen in Revelation. The tension, the evil, the darkness, the struggle to survive, the challenge of honor, the call to stand and keep standing, the hope of winning.

In the final movie, The Return of the King, the ultimate test is upon the earth. The battle of all battles. It is as if the forces of hell are released on this weak band of warriors. There appears to be no hope. Until ...............

Until the King arrives and summons an army that none can stand against.

Tolkien didn't make this story up without help from the book of Revelation. The final scenes, full of glory and celebration, come right out of this chapter.

Celebration of the King who brought victory.

Read: Revelation 19
Hallelujah!
1After this I heard what sounded like the roar of a great multitude in heaven shouting:
"Hallelujah!
Salvation and glory and power belong to our God,
2for true and just are his judgments.
He has condemned the great prostitute
who corrupted the earth by her adulteries.
He has avenged on her the blood of his servants." 3And again they shouted:
"Hallelujah!
The smoke from her goes up for ever and ever."
4The twenty-four elders and the four living creatures fell down and worshiped God, who was seated on the throne. And they cried:
"Amen, Hallelujah!"

5Then a voice came from the throne, saying:
"Praise our God,
all you his servants,
you who fear him,
both small and great!"

6Then I heard what sounded like a great multitude, like the roar of rushing waters and like loud peals of thunder, shouting:
"Hallelujah!
For our Lord God Almighty reigns.
7Let us rejoice and be glad
and give him glory!
For the wedding of the Lamb has come,
and his bride has made herself ready.
8Fine linen, bright and clean,
was given her to wear." (Fine linen stands for the righteous acts of the saints.)

9Then the angel said to me, "Write: 'Blessed are those who are invited to the wedding supper of the Lamb!' " And he added, "These are the true words of God."

The Rider on the White Horse
11I saw heaven standing open and there before me was a white horse, whose rider is called Faithful and True. With justice he judges and makes war. 12His eyes are like blazing fire, and on his head are many crowns. He has a name written on him that no one knows but he himself. 13He is dressed in a robe dipped in blood, and his name is the Word of God. 14The armies of heaven were following him, riding on white horses and dressed in fine linen, white and clean. 15Out of his mouth comes a sharp sword with which to strike down the nations. "He will rule them with an iron scepter." He treads the winepress of the fury of the wrath of God Almighty. 16On his robe and on his thigh he has this name written:
KING OF KINGS AND LORD OF LORDS.
17And I saw an angel standing in the sun, who cried in a loud voice to all the birds flying in midair, "Come, gather together for the great supper of God, 18 so that you may eat the flesh of kings, generals, and mighty men, of horses and their riders, and the flesh of all people, free and slave, small and great."

19Then I saw the beast and the kings of the earth and their armies gathered together to make war against the rider on the horse and his army. 20But the beast was captured, and with him the false prophet who had performed the miraculous signs on his behalf. With these signs he had deluded those who had received the mark of the beast and worshiped his image. The two of them were thrown alive into the fiery lake of burning sulfur. 21The rest of them were killed with the sword that came out of the mouth of the rider on the horse, and all the birds gorged themselves on their flesh.

Think:
There are a couple of things that strike me in this passage. First, there is celebration of the King and His victory. There is no mistaking WHO gets the glory (v.10). The repeated word Hallelujah is really two words made into one. Hallel = to praise and Jah = the Lord (shortened form of Jehovah or YHWH).

Sometimes it is easy to slip into the matrix of living and forget that there is a real battle waging for the minds and souls of people on this middle earth. It is easy to forget what really matters and that is the glory of the King.

Second, there is a celebration of relief. The Christians have suffered greatly. Evil has owned the day. Darkness and shadow ruled the land. Hope seemed to be lost. The return of the King brings relief and justice.

The relief comes as a result of God's judgment (v. 2, 15, 18, 21). This is an uncomfortable thing for those of us that live in tolerant cultures. Making judgments, stating opinions about the actions of others is the #1 sin in American culture. We are tolerant. We are tolerant of everything except intolerance. Think of the hypocrisy of that!

It is as if the spirit of the age has so ordered things so the Christians will stay silent long enough for him to make sure people do not hear the gospel. We need to be awake. We need to be aware. We need to speak up Church. We must not sleep. The King is coming and when he does it will be over. Those not invited to the wedding of the Lamb will die for eternity.

Do:
The worship of the Lamb is amazing. Throughout this book we have seen the majesty of Jesus lifted. We have seen the worship of God as done by those without sin or limit. What does our worship look like? Are we content to sing songs about ourselves in our worship services? There is none of that here. This is all about the King. Speak his praise out loud. Read out loud verses 6-8.

Are you willing to love people enough to tell them the truth? Are you willing to break the silence? Don't go to the grave quietly! You have neighbors and friends that could wind up on the wrong side of this story if you choose to "respect" them and not tell them the truth. How do you do this? Ask spiritual questions: "Where do you go to church?" "What do you think about Michael Jackson's death, that earthquake, etc.?" "Are you and God on good terms?"

DevoLink: Devotions to help you Link with God.
Posted by DevoLink at 1:18 AM