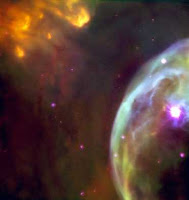 Intro:
Do you ever stop and look up? On vacation we got off the elevator to our room and were stopped in our tracks by an incredible sunset of purples, pinks, yellows and blues. It was a refreshing pause to a busy day at the beach.

A guy in college used to walk in front of my dorm, stop and stare in the sky. He would smile raise one of his hands and mumble something. From my window he looked like a whack job.

For my part, I did not have time to look up. I was too busy looking at my homework, the girls and the guy that was looking up.

Read: Revelation 8
1When he opened the seventh seal, there was silence in heaven for about half an hour.
2And I saw the seven angels who stand before God, and to them were given seven trumpets. 3Another angel, who had a golden censer, came and stood at the altar. He was given much incense to offer, with the prayers of all the saints, on the golden altar before the throne. 4The smoke of the incense, together with the prayers of the saints, went up before God from the angel's hand. 5Then the angel took the censer, filled it with fire from the altar, and hurled it on the earth; and there came peals of thunder, rumblings, flashes of lightning and an earthquake.

8The second angel sounded his trumpet, and something like a huge mountain, all ablaze, was thrown into the sea. A third of the sea turned into blood, 9a third of the living creatures in the sea died, and a third of the ships were destroyed.

10The third angel sounded his trumpet, and a great star, blazing like a torch, fell from the sky on a third of the rivers and on the springs of water— 11the name of the star is Wormwood. A third of the waters turned bitter, and many people died from the waters that had become bitter.

13As I watched, I heard an eagle that was flying in midair call out in a loud voice: "Woe! Woe! Woe to the inhabitants of the earth, because of the trumpet blasts about to be sounded by the other three angels!"

If you will note, everything is happening UP in the sky. Things are falling from above. Hail mixed with blood (v.7), a burning mountain (v.8), a blazing star (v.10). All falling from the sky to earth.

A 1/3 of the sun, moon and stars are darkened making daytime 4 hours shorter (v. 12). That would make it dark 4 hours earlier than normal. In the winter that would mean night time beginning at 1:00pm! Where is this taking place? UP in the sky.

As if the first 4 trumpet blasts are not devastating enough, the 3 yet to come are bad enough to cause a creature to declare, "Woe, woe, woe". Just as the 3x declaration of God's character is "Holy, holy, holy", so this word structure would have clued the hearer that this woe was of the highest order. Where is this taking place? UP in the sky.

What's the point? People tend to be earth bound and earth focused. It is as if there is one magnetic pole in the earth and another pole attached to our foreheads. The worries of this life, the pursuit of pleasure and the deceitfulness of riches bend the head down. So, we run from building to building and from meeting to meeting sometimes forgetting to look UP. It often takes something extra ordinary to get our attention, to break the magnetic, downward pull of the earth.

But in that Day everyone will be looking UP to the God who dwells on high and wishing they had paid better attention while there was still time.

Do:
Take some time to look UP today. Slow down, pause, reflect and listen. Lift a hand. Mumble something to God. Make sure no one is looking! :)


The above picture is the Bubble Nebula taken from the Hubble Telescope in 1998.
DevoLink: Devotions to help you Link with God.
Posted by DevoLink at 1:43 AM