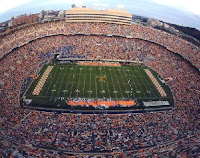 Intro:
I remember moving to TN from CA and wondering how that orange color was not against the law. It is gnarly. We stopped at a Cracker Barrel near Memphis and marveled at the sea of orange everything.

When it comes to diversity there is not much here. Everything is orange. But as with all things you spend time around, it eventually wears on you ... no pun intended. Eight years later I have some orange in my closet.

When we get to heaven though there will be a kaleidoscope of color!

9After this I looked and there before me was a great multitude that no one could count, from every nation, tribe, people and language, standing before the throne and in front of the Lamb. They were wearing white robes and were holding palm branches in their hands. 10And they cried out in a loud voice:
"Salvation belongs to our God, who sits on the throne, and to the Lamb."
11All the angels were standing around the throne and around the elders and the four living creatures. They fell down on their faces before the throne and worshiped God, 12saying:
"Amen! Praise and glory and wisdom and thanks and honor and power and strength be to our God for ever and ever. Amen!"

13Then one of the elders asked me, "These in white robes—who are they, and where did they come from?" 14I answered, "Sir, you know."

And he said, "These are they who have come out of the great tribulation; they have washed their robes and made them white in the blood of the Lamb. 15Therefore,
"they are before the throne of God
and serve him day and night in his temple;
and he who sits on the throne will spread his tent over them.
16Never again will they hunger;
never again will they thirst.
The sun will not beat upon them,
nor any scorching heat.
17For the Lamb at the center of the throne will be their shepherd;
he will lead them to springs of living water.
And God will wipe away every tear from their eyes."

Think:
In Genesis 12, God promised Abraham:
2 "I will make you into a great nation
and I will bless you;
I will make your name great,
and you will be a blessing.

3 I will bless those who bless you,
and whoever curses you I will curse;
and all peoples on earth
will be blessed through you."

There are 144,000 chosen to represent each of the tribes of Israel (v.4-8). This is by no means all that will be saved from Israel or the world (as some cults teach) but this is a representation of God's faithfulness to His promises.

There is another group represented in heaven (v.9). There is a multitude so large no one can count them! I remember going to my first University of Tennessee Vols football game. There were a ton of people in orange in that stadium. But not so many they couldn't count them! In fact, they announced the number during the game at 107,000.

The multitude in heaven is larger by far and very diverse. During the difficult days on the earth many will come to trust Jesus Christ as Lord and Savior. They will come from every nation and tribe to speak His praise. They will join the worship service currently running in heaven.

Heaven will be a kaleidoscope of color! It won't just be orange!

Do:
How open are you to different colors being in heaven? There will be people from India, Ethiopia, Beijing, Mexico, Ireland, Sudan, Iraq, Argentina and more.

Have you ever noticed that suffering and pain will bring you to your knees, put you in a chair or drive you to your feet? You will either submit to the pain and look to God for answers in trust or you will sit and just accept it or you will stand up and shake a fist and blame God for being unfair.
During dark times we have a choice. What are you going through now? How are you responding to the Lord in this time?

DevoLink: Devotions to help you Link with God.
Posted by DevoLink at 1:09 AM