Revelation: Knock, Knock ... WHO's there? 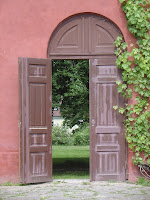 Intro:
You really need to read yesterday's DevoLink to appreciate the impact of this devotion!

We saw that Jesus has authority and ability to open doors and close doors. In fact, what he opens no one can shut and what he shuts no one can open. We saw that this was related to kingdoms (and businesses too) and salvation. Jesus has authority and ability to open or close any door he wants.
Maybe, though, there is a door he refuses to open. There just might be a door that he will not force open. He has the ability and even the authority but we have the power to leave it closed.
Doesn't that seem odd? Who's that knocking at the door? WHO's ringing the bell? Do me a favor, open the door and let Him in, ooooh yeah, yeah let Him in! Knock, knock.
Read:Revelation 3:14
14"To the angel of the church in Laodicea write:
These are the words of the Amen, the faithful and true witness, the ruler of God's creation. 15I know your deeds, that you are neither cold nor hot. I wish you were either one or the other! 16So, because you are lukewarm—neither hot nor cold—I am about to spit you out of my mouth. 17You say, 'I am rich; I have acquired wealth and do not need a thing.' But you do not realize that you are wretched, pitiful, poor, blind and naked. 18I counsel you to buy from me gold refined in the fire, so you can become rich; and white clothes to wear, so you can cover your shameful nakedness; and salve to put on your eyes, so you can see. 19Those whom I love I rebuke and discipline. So be earnest, and repent. 20 Here I am! I stand at the door and knock. If anyone hears my voice and opens the door, I will come in and eat with him, and he with me. 21To him who overcomes, I will give the right to sit with me on my throne, just as I overcame and sat down with my Father on his throne. 22He who has an ear, let him hear what the Spirit says to the churches."

Think:
This church was far from Jesus and did not know it. They were not against Him and they were not for Him (v. 16) they were comfortable in between. They had one foot in the Kingdom and one foot in the world. What happened?
Money, that's what happened (v. 17). Stuff, wealth, things, money. They forgot their need of Jesus to daily cleanse and restore them. They forgot that it was Jesus that opened the doors of opportunity to allow them to make the money in the first place. They forgot to BE with him and spend time alone with him.
Reread the section in RED above. Isn't it odd? Not a few verses above this we saw that Jesus can open ANY door he wants! That he has the authority and ability to open doors and close doors. The God of glory and power can open any door he chooses and yet stands at the door of your life and KNOCKS! That's crazy.
This verse is often used in gospel presentations but it really is a message to the Church. This is written to the church at Laodicea. Written to believers.
So, Jesus invites these lukewarm Christians to open the door to him. The great Door Opener is knocking and urging these Christians to open the door to him. That blows my mind. It is both a wonderful and yet somehow a sad picture.
That is how much Jesus wants relationship with us! He is willing to withhold his authority and ability to not force the door open. He is like a friend or lover that is knocking at the door so he can enter the house and enjoy a meal and some good conversation.
Knock, knock.
Do:
Are you aware of Jesus knocking at the door of your heart? Are you aware that Jesus wants to know you personally? He wants to share a meal with you. He wants to encourage you and challenge you.
You have the power to open that door!
Knock, knock. WHO's that knocking at the door, let Him in.

DevoLink: Devotions to help you Link with God.
Posted by DevoLink at 1:03 AM