Revelation: Behind the Curtain 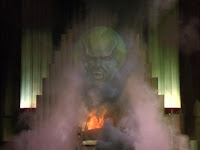 As such, we try to run God out of our schools ... at least that is 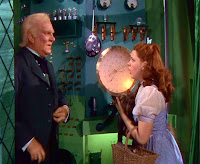 what the bumper stickers read! Really we cannot get God out of our schools. He is God and can go where He pleases.

God is my co-pilot .... that is another tacky bumper sticker. Last time I checked, God is the Pilot and we might be lucky to be in the luggage compartment! We do not make Jesus Lord any more than we make the CEO our boss. It is what it is and He is who He is.

We can develop such a wrong impression of who God is and what he is doing if we only look at the news and the bumper stickers. You can get discouraged and feel that God is not active or worse, feel that He is somehow powerless to act!

Let this reading from Revelation give you a glimpse of what is going on in heaven. You might see that this God we serve is not run out by any school board and he is no co-pilot to anyone.

Let's look beyond the curtain.

Read: Revelation 4
1After this I looked, and there before me was a door standing open in heaven. And the voice I had first heard speaking to me like a trumpet said, "Come up here, and I will show you what must take place after this." 2At once I was in the Spirit, and there before me was a throne in heaven with someone sitting on it. 3And the one who sat there had the appearance of jasper and carnelian. A rainbow, resembling an emerald, encircled the throne. 4Surrounding the throne were twenty-four other thrones, and seated on them were twenty-four elders. They were dressed in white and had crowns of gold on their heads. 5From the throne came flashes of lightning, rumblings and peals of thunder. Before the throne, seven lamps were blazing. These are the seven spirits of God. 6Also before the throne there was what looked like a sea of glass, clear as crystal.
In the center, around the throne, were four living creatures, and they were covered with eyes, in front and in back. 7The first living creature was like a lion, the second was like an ox, the third had a face like a man, the fourth was like a flying eagle. 8Each of the four living creatures had six wings and was covered with eyes all around, even under his wings. Day and night they never stop saying: "Holy, holy, holy is the Lord God Almighty, who was, and is, and is to come." 9Whenever the living creatures give glory, honor and thanks to him who sits on the throne and who lives for ever and ever, 10the twenty-four elders fall down before him who sits on the throne, and worship him who lives for ever and ever. They lay their crowns before the throne and say:
11"You are worthy, our Lord and God,
to receive glory and honor and power,
for you created all things,
and by your will they were created
and have their being."

Think:
As good as our democracy is you will never see a group of people give their leader this much respect and fear. No school board, no deacon board, no county commission or city council will ever revere a leader in the way that God is honored.

Yet, these same invent ways to remove His influence in society. I know that is a general statement but the basic principle remains. We have a low view of God in society. The fear of God is nearly gone in America.

Yet what is going on in heaven? What does it look like behind the curtain? Our culture wants us to think that God is just like the Wizard of Oz. He talks a big game and tries to scare people into submission but really he is weak and impotent. I do not get that from this passage! As I try to picture the scene as John saw it I am confronted with my secular worldview of God.

There are things in the room with God that have eyes all over them and who sing his praise. These are somebodys. These are elders, creatures of respect and honor. These are leaders in heaven. Yet they fall down before the King and cast their crowns at his feet. We don't even talk off our ball caps in prayer or when entering a room anymore! What a contrast.

Ok, you've seen beyond the curtain, what do you think?

Do:
How is your view of God? As you reflect on all the years of government schooling and the constant message of society is it possible that we have forgotten that our God is an awesome God? Is it possible to have forgotten that He alone is worthy to receive glory and honor and power? Do you see now that you cannot make God your co-pilot? It is not even a possibility. He is God alone from before time began.

Listen to You Are God Alone in the DevoLink Worship Center.

DevoLink: Devotions to help you Link with God.
Posted by DevoLink at 1:17 AM