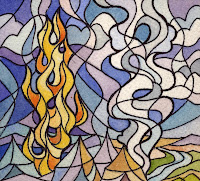 Intro:
We all live with a hedge of protection that we cannot see. When we are marked by Christ we have a new relationship with the world, with the Church and with the enemy of our souls.

If the Lord did not protect us at every turn we would be undone instantly.

Martin Luther got it right when he penned the word to A Mighty Fortress. Try reading these words aloud.

A mighty fortress is our God,
A bulwark never failing.
Our helper He amid the flood
Of mortal ills prevailing.
For still our ancient foe
Doth seek to work us woe.
His craft and power are great,
And, armed with cruel hate,
On earth is not his equal.

Did we in our own strength confide,
Our striving would be losing,
Were not the right man on our side,
The man of God's own choosing.
Dost ask who that may be?
Christ Jesus, it is He.
Lord Sabboth, his name,
From age to age the same,
And He must win the battle.

And though this world, with devils filled,
Should threaten to undo us,
We will not fear, for God hath willed
His truth to triumph through us.
The Prince of Darkness grim,
We tremble not for him.
His rage we can endure,
For lo, his doom is sure.
One little word shall fell him.

That word above all earthly powers
Not thanks to them, abideth.
The Spirit and the gifts are ours
Through him who with us sideth.
Let goods and kindred go,
This mortal life also.
The body they may kill,
God's truth abideth still.
His kingdom is forever...

17 When Pharaoh let the people go, God did not lead them on the road through the Philistine country, though that was shorter. For God said, "If they face war, they might change their minds and return to Egypt." 18 So God led the people around by the desert road toward the Red Sea. The Israelites went up out of Egypt armed for battle.
19 Moses took the bones of Joseph with him because Joseph had made the sons of Israel swear an oath. He had said, "God will surely come to your aid, and then you must carry my bones up with you from this place."

19 Then the angel of God, who had been traveling in front of Israel's army, withdrew and went behind them. The pillar of cloud also moved from in front and stood behind them, 20 coming between the armies of Egypt and Israel. Throughout the night the cloud brought darkness to the one side and light to the other side; so neither went near the other all night long.

8 On that day the LORD will shield those who live in Jerusalem, so that the feeblest among them will be like David, and the house of David will be like God, like the Angel of the LORD going before them. 9 On that day I will set out to destroy all the nations that attack Jerusalem.

Think:
Moses did what he was asked to do ... he guided God's people out of Egypt and into the desert. Remember, for 40 years he learned how to live in the desert. God never wastes anything in our lives!

When the difficulty came God did what only He could do ... he guided the people to safety and protected them from harm.

Who is doing all this guiding and protection? The other passages I had you read make clear that the Angel of the LORD was actively protecting the people of Israel. He was saving them from certain death. He stepped in the gap. He provided the buffer from the enemy, allowing them time to flee.

Who did that? The angel of the LORD?

That's Jesus in the OT.

Do:
There is no enemy that can stand against you if Christ is protecting you. The enemy of your soul would seek to destroy you by any means necessary but God spares you ... daily! If God were not on our side daily, we would be dead and washed up.

The enemy of our souls comes to steal, kill and destroy. He would have you dispatched now if he could. But Jesus stands as your rear guard. He protects you from attack. He takes the fiery arrows of the evil one for you. He prays for you on a regular basis. He prepares a place for you so when you do die you can be with Him in heaven.

Someone wisely said, "We are immortal until God is finished with us on earth." In other words, we cannot and will not die until we have completed what God has called us to do. In the mean time we battle against powers of this present darkness with the LORD providing protection all the way.

DevoLink: Devotions to help you Link with God.
Posted by DevoLink at 5:09 AM