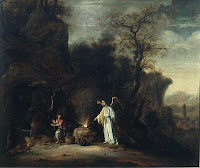 Intro:
Does God walk in your day? Is He actively present in your world today?

The culture says, "No" and wants us to get over Him. We've sought to remove Him from our schools, our entertainment, our government and more.

My wife and I watched The Proposal last night. I won't bore you with the details of the movie but I want to make an observation.

One of the first words used in the movie is "Jesus", said in frustration and as a curse word. The movie continues to use God's name in an empty way. When they finally bring some spiritual side to the movie we get it from grandma, who is chanting to the "spirits" in some form of outdoor, witch ritual. Wow, that's helpful! (sarcasm implied)

Culturally God is in the back seat of the car and we can easily be lulled to sleep and not notice His walk in our lives. He is active and moving.

Jesus walks in your day today.

7 When the Israelites cried to the LORD because of Midian, 8 he sent them a prophet, who said, "This is what the LORD, the God of Israel, says: I brought you up out of Egypt, out of the land of slavery. 9 I snatched you from the power of Egypt and from the hand of all your oppressors. I drove them from before you and gave you their land. 10 I said to you, 'I am the LORD your God; do not worship the gods of the Amorites, in whose land you live.' But you have not listened to me."

11 The angel of the LORD came and sat down under the oak in Ophrah that belonged to Joash the Abiezrite, where his son Gideon was threshing wheat in a winepress to keep it from the Midianites. 12 When the angel of the LORD appeared to Gideon, he said, "The LORD is with you, mighty warrior."

13 "But sir," Gideon replied, "if the LORD is with us, why has all this happened to us? Where are all his wonders that our fathers told us about when they said, 'Did not the LORD bring us up out of Egypt?' But now the LORD has abandoned us and put us into the hand of Midian."

14 The LORD turned to him and said, "Go in the strength you have and save Israel out of Midian's hand. Am I not sending you?"

15 "But Lord , " Gideon asked, "how can I save Israel? My clan is the weakest in Manasseh, and I am the least in my family."

Think:
What a great story! Gideon is scared of the people around him and yet he is the one that God has chosen to lead the battle for victory. God often uses the least likely of folks to do His greatest work so people would never mistake that it was God doing the work!

Whenever you see the phrase, "the angel of the LORD" in the Old Testament you are looking at Jesus in the OT. This is not true for references to "an" angel. It is always used in the formula "the" angel. That is an important distinction.

I wanted to start with the first couple in the garden but thought you might need some proof.

Here with Gideon, the angel of the LORD appears to him with a challenge. Gideon does not recognize Who this visitor is but the author of Judges wants to make sure we don't miss it.

In verse 14, we are told that this angel of the LORD is the LORD in bodily form.

Gideon shows us this as well in the names he uses for this heavenly Visitor. In verse 13 he calls Him, "sir" but in verse 15 he calls him, "Lord".

How cool is that?

Do:
Gideon did not recognize Who was talking with him. Jesus came, sat down, appeared and spoke to Gideon. After this Gideon recognized that He was the Lord.

Do you think Jesus might want to come, sit, appear or speak to you today? For that matter, do you think He is possibly doing that right now?

There is so much clutter in our lives. There are so many distractions. So many poorly made movies that drag the name of our God in the mud. Maybe we need to reaffirm our commitment to come, sit down, appear in His presence and talk with Him. We might just find He's been there all along.

He's like that!
DevoLink: Devotions to help you Link with God.
Posted by DevoLink at 5:26 AM