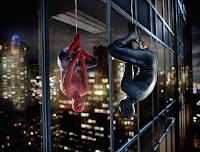 Intro:
Spiderman symbolizes so much that is good as a self-sacrificing hero often does. Yet when unchecked anger gets the better of him darkness begins to grow. Even against his will.

Please take time to pray before you read that God might speak to you as you read.

1 It is actually reported that there is sexual immorality among you, and of a kind that does not occur even among pagans: A man has his father's wife. 2 And you are proud! Shouldn't you rather have been filled with grief and have put out of your fellowship the man who did this? 3 Even though I am not physically present, I am with you in spirit. And I have already passed judgment on the one who did this, just as if I were present. 4 When you are assembled in the name of our Lord Jesus and I am with you in spirit, and the power of our Lord Jesus is present, 5 hand this man over to Satan, so that the sinful nature may be destroyed and his spirit saved on the day of the Lord.

6 Your boasting is not good. Don't you know that a little yeast works through the whole batch of dough? 7 Get rid of the old yeast that you may be a new batch without yeast—as you really are. For Christ, our Passover lamb, has been sacrificed. 8 Therefore let us keep the Festival, not with the old yeast, the yeast of malice and wickedness, but with bread without yeast, the bread of sincerity and truth.

9 I have written you in my letter not to associate with sexually immoral people— 10 not at all meaning the people of this world who are immoral, or the greedy and swindlers, or idolaters. In that case you would have to leave this world. 11 But now I am writing you that you must not associate with anyone who calls himself a brother but is sexually immoral or greedy, an idolater or a slanderer, a drunkard or a swindler. With such a man do not even eat.

Think:
This man "had" his father's wife. That's pretty messed up. I think the language would suggest that this was not his mother but rather a younger, second wife of the father. Regardless, there is a serious problem in that home and in that church.

Most churches have similar issues in house. We tend to focus on the sexual sin when it comes to church discipline but maybe we need to widen the net to include those that slander others or take what belongs to others (v.11).

Judging sin begins with our own lives and spreads to the church. When we are made aware of sin in our lives (oh yeah, sin means to "miss the mark") what we do next matters greatly. Our response to our sin impacts our spiritual condition more than any single thing.

Notice the statements, "you are proud" and "your boasting is not good" (v.2,6). Does that strike you as an odd response to a man that "has his father's wife"? It should. How would that make someone proud?

We need to dig into the Greek for some insight. This is a Perfect Passive Indicative. I know, brutal! Memories of HS English. Stick with me.

How did these Christians become proud? How could they have such a lame response to such serious sin? Really simply. When they heard about the sin in their midst they did nothing about it! That's it. Did you catch that? When they first learned that the man was sleeping with his father's wife they ignored it. They did not deal with it. They did not judge the sin correctly.

When they did not deal with the sin they began to think wrongly about God and sin. Not seeing God's judgment and misunderstanding the grace and patience of God they became PROUD. They took a few steps away from the Father.

Interesting isn't it? They became proud and NOT by choice. It happened TO them (passive verb, remember?). Proud boasting was the result of a heart with unjudged sin.

When sin is not dealt with in our lives or in a church body it is more damaging then expected. A crusty pride will take over the heart like a black Spiderman suit.

Do:
How do you deal with sin when you are confronted? When the Holy Spirit calls you on something, when a friend asks you a tough question, when you realize you are wrong in a dream, when confronted by the Scriptures ...... what happens next is CRITICAL. If the darkness is not checked at the door then we are headed for trouble. If we do not judge sin correctly then we will lock up our spiritual growth.

Take time today to seek the Lord and ask Him to reveal anything in you that is darkness. Ask Him to take you to the mat if necessary. Confess any pride that may have developed as you have ignored darkness and thought you were actually getting away with it.

DevoLink: Devotions to help you Link with God.
Posted by DevoLink at 6:05 AM