CS Lewis: Judging the Outside 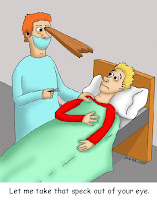 "Take the case of a sour old maid, who is a Christian, but cantankerous. On the other hand, take some pleasant and popular fellow, but who has never been to Church. Who knows how much more cantankerous the old maid might be if she were not a Christian, and how much more likeable the nice fellow might be if he were a Christian? You can't judge Christianity simply by comparing the product in these two people; you would need to know what kind of raw material Christ was working on in both cases."

Read: 1 Samuel 16:1-7
1 The LORD said to Samuel, "How long will you mourn for Saul, since I have rejected him as king over Israel? Fill your horn with oil and be on your way; I am sending you to Jesse of Bethlehem. I have chosen one of his sons to be king." 2 But Samuel said, "How can I go? Saul will hear about it and kill me." The LORD said, "Take a heifer with you and say, 'I have come to sacrifice to the LORD.' 3 Invite Jesse to the sacrifice, and I will show you what to do. You are to anoint for me the one I indicate."

4 Samuel did what the LORD said. When he arrived at Bethlehem, the elders of the town trembled when they met him. They asked, "Do you come in peace?" 5 Samuel replied, "Yes, in peace; I have come to sacrifice to the LORD. Consecrate yourselves and come to the sacrifice with me." Then he consecrated Jesse and his sons and invited them to the sacrifice.

6 When they arrived, Samuel saw Eliab and thought, "Surely the LORD's anointed stands here before the LORD."

That's what Samuel needed to learn. He needed to see what God saw. He needed to slow down and seek God's heart for the people in front of him. It is interesting that after Samuel makes the first mistake he changes his sight. He begins to see through the eye not just with the eye. So much does he change his view that he gets through ALL the Jesse's kids and has the faith to ask if there are any others that are missing from the party.

Jesse's response: "Well yeah, there is the youngest, David, but you don't want him, he's just a kid that takes care of sheep. He's not special."

God is looking at the heart. He knows who we are and where we have been. He has us on a growth plan that is in His timing. He sees us in fallen, fearful places and joyful places as well. He sees us doing the menial tasks. He is working on us where we are at.

Do:
We need to be careful when we judge who is OK with God and who is not.

We need to be careful when we judge who is righteous enough and who God still needs to work on. I believe there is a story about a guy with a log in his eye that deals with this one!

Your Christian, cantankerous, old maid neighbor might be more in Christ than you recognize.

The Christian teen from the alcoholic home in your child's school might be a greater work of God than you realize.


DevoLink: Devotions to help you Link with God.
Posted by DevoLink at 8:30 AM