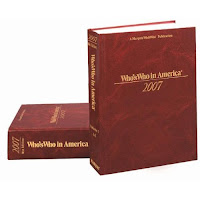 Intro:
Is your name in the Who's Who in America book? Since 1899 this book "has chronicled the lives and careers of America's most noteworthy people". How do I know about this book? I knew some folks in Newport Beach, CA that were in it. I can assure you that I am not in it.

Somewhere and for some reason a group of people write books to tell us who is important. Kind of makes me gag ... probably because I want to be in a book like that.

I will never be a Who's Who in America but I am somebody in heaven! My name is in a more significant book ... the Book of Life.

Read: Selected
Psalm 69:28
28 May they be blotted out of the book of life and not be listed with the righteous.

Revelation 3:4-5
4 “Yet there are some in the church in Sardis who have not soiled their clothes with evil. They will walk with me in white, for they are worthy. 5 All who are victorious will be clothed in white. I will never erase their names from the Book of Life, but I will announce before my Father and his angels that they are mine.

Revelation 13:8
8All inhabitants of the earth will worship the beast—all whose names have not been written in the book of life belonging to the Lamb that was slain from the creation of the world.

Revelation 20:15
15If anyone's name was not found written in the book of life, he was thrown into the lake of fire.

Philippians 4: 2-3
2Now I appeal to Euodia and Syntyche. Please, because you belong to the Lord, settle your disagreement. 3 And I ask you, my true partner, to help these two women, for they worked hard with me in telling others the Good News. They worked along with Clement and the rest of my co-workers, whose names are written in the Book of Life.

Think:
This represents most of the verses in the Bible regarding the Book of Life. We can learn some important things from these passages:
1. King David prayed against his own people ("enemies") that they would be taken out of this book. That tells me that there was some developed understanding that God had a record of those that were his on earth 1200 years before Jesus (Ps 69:28).
2. There appears to be a way to get your name out of the book. I am not sure what other conclusion you can reach from Jesus' words in Revelation 3 above. The fact that Jesus assures the "not soiled" believers that they will never be "erased" implies that erasing can happen.
3. Those not in the book will worship the beast, those whose names are in the book of life will not follow the beast's methods (Rev. 13:8).
4. The book of life was written from the foundation of the "cosmos". In other words, God knew from the beginning who would respond to Christ and he recorded their names in the Who's Who to Jesus book (Rev. 17:8).
5. Those not in the book will end up in the lake of fire (Rev. 20:15). This lake was not created for humans but for the devil and his angels (Mt. 25). Yet it will be the final end of those that deny the lordship and salvation of Jesus Christ.
6. Paul was able to identify those that were in the book of life not based on perfect behavior (they were having disagreements) but based on what they did in promoting the gospel in the world. It was about what they did that identified who they were (Phil. 4:3).

Do:
Is your name in the Who's Who to Jesus book? Make sure your name is in the book of life. The consequences for being out of the book are eternal and terrible.

Have you surrendered your life to Jesus? Is He the King of your life? Is He your Savior?

Are you keeping yourself unsoiled by the world? To soil = pollute, get dirty with mud, to stain, to defile. It is used again in Rev. 14 of those who have not "soiled" themselves by adultery or fornication.

Take time to examine your life and your walk with Jesus. Confess sin. Surrender afresh this day. Give yourself over to Jesus again.

DevoLink: Devotions to help you Link with God.
Posted by DevoLink at 1:15 AM