Give Thanks: Starts with our thinking 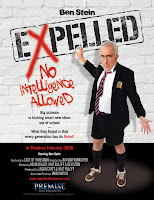 I recently watched a movie about the origin of the world. How did everything come into existence? Was it random (Darwin) or was there some level of intelligence behind it all?

Apparently there is a new cuss word on the market: intelligent design. Ben Stein's movie, Expelled reveals a lot about our culture. There is a concerted effort to not have God in any part of life. Ben's movie is pretty revealing. Please check this link: Expelled.

What does this have to do with giving thanks? The answer might surprise you.

Read: Romans 1:18-25
18The wrath of God is being revealed from heaven against all the godlessness and wickedness of men who suppress the truth by their wickedness, 19since what may be known about God is plain to them, because God has made it plain to them. 20For since the creation of the world God's invisible qualities—his eternal power and divine nature—have been clearly seen, being understood from what has been made, so that men are without excuse.

21For although they knew God, they neither glorified him as God nor gave thanks to him, but their thinking became futile and their foolish hearts were darkened. 22Although they claimed to be wise, they became fools 23and exchanged the glory of the immortal God for images made to look like mortal man and birds and animals and reptiles.

24Therefore God gave them over in the sinful desires of their hearts to sexual impurity for the degrading of their bodies with one another. 25They exchanged the truth of God for a lie, and worshiped and served created things rather than the Creator—who is forever praised. Amen.

Think:
God has left His footprint everywhere. Since the ribbon cutting ceremony for the world, God made sure we would be able to

The problem: people do not want to be told what to do. We like to do our own thing. This philosophy does not work well with managers & bosses and it works even worse with God!


Paul tells us that men loved the darkness (v. 18) and that they wanted to be free from the "god delusion" by suppressing the truth that is so clear in the microscope and the sunrise.

As a result they failed to glorify Him for his rightful place as Creator God and they refused to give Him thanks for his rightful place as Faithful God. They turned away from what was obvious and became fools (v. 22) & creation worshippers (v. 23). This finding its perfect expression in sexual impurity as men sought to give ultimate value to the creation and to one another (v. 24).

What is striking is the failure to think rightly led to an inability to thank rightly. Reread that sentence. There is a nugget here for us. Proper thinking leads to proper thanking. I have heard that the words Think and Thank share the same root word making them inseparable. We will not thank God if we do not first think God.

Do:
How cluttered is your thinking about God and creation? How influenced is your worldview regarding God, creation, evolution, naturalism, etc.?

Are you sexually immoral? What is your thought life like? How about your actions? Do these reflect a world worship that needs to be confessed as sin to God?

Rent Expelled from Blockbuster or stream it online from Netflix. It will open your eyes and help you to think clearer.

DevoLink: Devotions to help you Link with God.
Posted by DevoLink at 12:33 AM