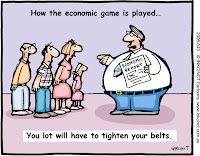 Intro:
"That's totally beast". That's what my public educated son told me one day. I was a little caught off guard. Beast? He tried to convenience me that "beast" actually means "awesome". What? How did that happen?

When we we were kids we would say something was "bad" and that was actually good. So things don't change much.

However, the word "beast" brings up many images that are not good. Many of those images come right out of Revelation 13.

Read: Revelation 13
1And the dragon stood on the shore of the sea.

The Beast out of the Sea
And I saw a beast coming out of the sea. He had ten horns and seven heads, with ten crowns on his horns, and on each head a blasphemous name. 2The beast I saw resembled a leopard, but had feet like those of a bear and a mouth like that of a lion. The dragon gave the beast his power and his throne and great authority. 3One of the heads of the beast seemed to have had a fatal wound, but the fatal wound had been healed. The whole world was astonished and followed the beast. 4Men worshiped the dragon because he had given authority to the beast, and they also worshiped the beast and asked, "Who is like the beast? Who can make war against him?"
5The beast was given a mouth to utter proud words and blasphemies and to exercise his authority for forty-two months. 6He opened his mouth to blaspheme God, and to slander his name and his dwelling place and those who live in heaven. 7He was given power to make war against the saints and to conquer them. And he was given authority over every tribe, people, language and nation. 8All inhabitants of the earth will worship the beast—all whose names have not been written in the book of life belonging to the Lamb that was slain from the creation of the world.

The Beast out of the Earth
11Then I saw another beast, coming out of the earth. He had two horns like a lamb, but he spoke like a dragon. 12He exercised all the authority of the first beast on his behalf, and made the earth and its inhabitants worship the first beast, whose fatal wound had been healed. 13And he performed great and miraculous signs, even causing fire to come down from heaven to earth in full view of men. 14Because of the signs he was given power to do on behalf of the first beast, he deceived the inhabitants of the earth. He ordered them to set up an image in honor of the beast who was wounded by the sword and yet lived. 15He was given power to give breath to the image of the first beast, so that it could speak and cause all who refused to worship the image to be killed. 16He also forced everyone, small and great, rich and poor, free and slave, to receive a mark on his right hand or on his forehead, 17so that no one could buy or sell unless he had the mark, which is the name of the beast or the number of his name.
18This calls for wisdom. If anyone has insight, let him calculate the number of the beast, for it is man's number. His number is 666.

Think:
Five things to note about the beast:

2. He will deceive the world and they will follow him (v. 3-4, 13-14). His raising from the dead and miracles will fool everyone but the Christians.

5. He will control the world and the monetary system (v. 16-18). People will not be able to get food or make money without some level of allegiance to the beast.

Do:
I think the Christian church in America is at risk. If we continue the way we are today we could fall away if these evil days were upon us. Why would I say that?

1. We love money & we love food - Paul warned that in the end times our god will be our appetite! That we will live to be satisfied by food and things. We are a pretty gluttonous people. When the world system requires worshipping the beast to eat, drink and be merry some are going to fall for it.

2. We love the sensational - gotta feel it man! We like to be wowed by music, movies, extreme sports, 24-7 news channels, car accidents, missing moms that were probably kidnapped by their husbands ....... on and on it goes. When the beast shows up and does miracles some are going to fall for it. I guarantee it.

Carve out some time to be alone this week. Say "no" to a few meals. Control your body and make it YOUR slave, not the other way around.

DevoLink: Devotions to help you Link with God.
Posted by DevoLink at 12:40 AM