Revelation: The devil's in the details 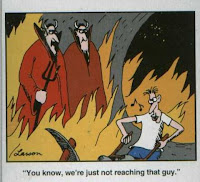 Intro:
Is the devil real or something that people have made up to personify evil? There are some that do not believe that the devil even exists.

Thomas Jefferson, a founding father of America, did not believe in the existence of the spiritual world. His Jefferson Bible was an attempt to "demythologize" the scriptures. In other words, he created a bible with no devil, no angels, no resurrection and no afterlife. He created a moral code for people to follow without the spiritual component.

We are not too different in practice. In our attempts to be practical we can often miss the spiritual. We have a tendency to demythologize life to make it more functional and in our control. It is the big life events of birth, death and suffering that force us to change our lens and ask deeper questions.

I am raising this because of what we are reading today. As I read through this with my family I was surprised at the role satan plays in the church and the culture. So much of my Christian experience does not deal with demonic influence ... at least not that I am keenly aware of.

Think:
Does the emphasis on satan surprise you? Does it cause you pause? He is a defeated foe but a foe he remains. He hates Jesus and those that name the name of Jesus. Therefore he hates the genuine followers of Jesus Christ.

Look at his influence. Apparently he owns a synagogue (v.9). The Jewish leadership and the members of the synagogue were opposing the Church for many reasons. Some were motivated politically, some financially and others spiritually but really something deeper was happening. Satan was so at work that Jesus calls it a "synagogue of Satan".
This led to suffering and persecution and death for the members of some of the churches (v.10). Jesus says that the devil will put some of you in prison. Clearly he, himself, is not going to be doing this. But he is given credit for doing so. He is the power seen behind the actions of others. He is the emperor behind Darth Vader, if you will.

In another instance, satan is said to have a throne - a seat of power and authority and also that he owns a city (v.13). His evil influence seen in the actions of others challenges the faith of the believers (v.13) and even caused the death of a key Christian leader.
Is satan active in the church today? You'd be foolish to say he is not. The issue is where and what does it look like?
By the time we reach the times described here in Revelation, he is actively opposing the church. He is the cause of persecution and suffering. He is running religious institutions and cities. Obviously we are moving toward those days and so his influence and power must be active though we do not see it clearly.
Do:
If satan's goal is to defame the name of Christ then he is doing a great job in the church already! We have so many issues in the church today. We embrace cultural relativism where every idea is equal and everything is gray. We embrace divorce. We embrace spending excesses. We embrace programs over people. We love gossip. We fight and argue for position.
Now, not all churches or all Christians have the above issues but the over all view of the Church in America would support those statements.
Further, the Church in the world is undergoing persecution like not seen in the past. Hundreds of thousands give their life for Christ in Africa, China and other parts of the world. Just because it is not in the news does not mean it is not real. Check out the Voice of the Martyrs site: http://www.persecution.com/
You might want to pick up CS Lewis' Screwtape Letters and see how subtle satan can work in a church, in a pew, in our choices.

Be self-controlled and alert. Your enemy the devil prowls around like a roaring lion looking for someone to devour. Resist him, standing firm in the faith, because you know that your brothers throughout the world are undergoing the same kind of sufferings. And the God of all grace, who called you to his eternal glory in Christ, after you have suffered a little while, will himself restore you and make you strong, firm and steadfast. To him be the power for ever and ever. Amen.

DevoLink: Devotions to help you Link with God.
Posted by DevoLink at 3:15 AM