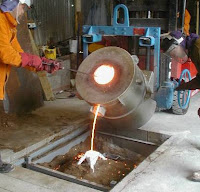 Intro:
We will look at the book of Revelation this summer. There is much we can learn and need to pay attention to in this book. It is a book about the future but also about now.

I dislike those pictures of Jesus that make him look weak and even feminine. Well intentioned as they may be, often the images we create are not helpful or accurate. Today we will add some images to our picture library.

The book of Revelation is first and foremost a book about Jesus. In it we see Jesus in his power and glory. A strong picture of the Lamb who was killed and is worthy to receive honor and glory and blessing.

The book of Revelation is a book about last things. In it we learn what is coming, who wins and how. With the state of the world today (and the state of the Church as well) it would seem that the end of all things could be at hand. I am not an alarmist of any sort but I do often wonder when all these things will finally take place.

The book of Revelation is a book about priorities. In it we see what God values and are invited to adjust our values and goals in light of the end of all things.

Read: Revelation 1
1 The revelation of Jesus Christ, which God gave him to show his servants what must soon take place. He made it known by sending his angel to his servant John, 2 who testifies to everything he saw—that is, the word of God and the testimony of Jesus Christ. 3 Blessed is the one who reads the words of this prophecy, and blessed are those who hear it and take to heart what is written in it, because the time is near.

4 John,
To the seven churches in the province of Asia:
Grace and peace to you from him who is, and who was, and who is to come, and from the seven spirits before his throne, 5 and from Jesus Christ, who is the faithful witness, the firstborn from the dead, and the ruler of the kings of the earth.

To him who loves us and has freed us from our sins by his blood, 6 and has made us to be a kingdom and priests to serve his God and Father—to him be glory and power for ever and ever! Amen.
7 Look, he is coming with the clouds,
and every eye will see him,
even those who pierced him;
and all the peoples of the earth will mourn because of him. So shall it be! Amen.

9 I, John, your brother and companion in the suffering and kingdom and patient endurance that are ours in Jesus, was on the island of Patmos because of the word of God and the testimony of Jesus. 10 On the Lord's Day I was in the Spirit, and I heard behind me a loud voice like a trumpet, 11 which said: "Write on a scroll what you see and send it to the seven churches: to Ephesus, Smyrna, Pergamum, Thyatira, Sardis, Philadelphia and Laodicea."
12 I turned around to see the voice that was speaking to me. And when I turned I saw seven golden lampstands, 13 and among the lampstands was someone "like a son of man,"dressed in a robe reaching down to his feet and with a golden sash around his chest. 14 His head and hair were white like wool, as white as snow, and his eyes were like blazing fire. 15 His feet were like bronze glowing in a furnace, and his voice was like the sound of rushing waters. 16 In his right hand he held seven stars, and out of his mouth came a sharp double-edged sword. His face was like the sun shining in all its brilliance.

17 When I saw him, I fell at his feet as though dead. Then he placed his right hand on me and said: "Do not be afraid. I am the First and the Last. 18 I am the Living One; I was dead, and behold I am alive for ever and ever! And I hold the keys of death and Hades.

Think:
What is your image of Jesus? When you picture him, does he look human or alien? The image of Jesus in the book of Revelation looks nothing like the God-man that walked on earth. This image of Jesus is wild and foreign. He is pictured in total holiness and power. He is the victor.

The clothing of Jesus indicates that He is a person of great dignity and authority (v.13). Long robes were only worn by those who didn’t have to work much, so they were a picture of great status and authority. The golden band around his chest reflect the clothes of the high priest or royalty.

Interesting that the Bible teaches us that judgment begins with the house of God, or the Church. We get judged before the world does. The fire of God will refine us but destroy those that reject Christ.

Not surprising that Jesus is standing among the churches and is ready to judge them (see chapter 2).

Do:
What is your image of Jesus? Is he only meek and mild? Is he only human? Is he on the cross? Is he raised from the dead? Maybe even on his throne. My guess is that he does not look like this image from Revelation 1. Does your image library need some updating?

How focused are you on the end of all things? Are you aware that this could be your last day on earth? How does that effect the choices you will make today?

DevoLink: Devotions to help you Link with God.
Posted by DevoLink at 10:22 PM