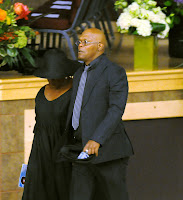 One funeral was for an 80 year old woman. The other a 40 year old man. Both open casket. Both uncomfortable. I do not like funerals. I like parties. Parties are loud and full of smiles. Funerals are quiet and full of tears.

However, there is more wisdom at a funeral then at a party. I have gained more value from being at the graveside of a friend then at the party of the century.


I was looking at pictures of funerals to select one for today's DevoLink. There are many pictures of the Bernie Mac funeral. One in particular caught my eye. A picture of Samuel L Jackson walking the isle with a female. He is very sober. He looks serious and reflective. He looks like he'd rather be anywhere than at a funeral for a friend. Yet this is not a bad place for him to be. At a funeral, there remains a possibility that he could ask the difficult questions we do not like to ask and that he might reflect on what happens after death.


Think:
This is really backwards thinking. A funeral is the last place we want to go! Most of us do anything we can to avoid the topic of our own death. We work so hard to ignore the death signs. We buy products to hide wrinkles. We buy products to hide gray hair. We use deodorant to hide the smell of decay. We ignore the weight gain and tiredness that comes with aging.

Yet, the invitation to think through your death comes to you every single night when you go to sleep. Have you ever noticed that sleep mirrors death? Think through that. You lie down. You close your eyes. You are in the dark. You are alone. Your breathing gets shallow. Your heartbeat slows down. This is why the NT authors called the death of Christians as being "asleep" (see 1 Thessalonians 4).

Do:
Are you afraid of death and dying? Does knowing Jesus give you an assurance today? (See Hebrews 2:14-15)

Think through the last funeral you went to. Reflect on the mood. The colors. The images. Let that sink in. That is your story and mine some day. Are you ready to die? Do not run from it. Embrace it.

As you go to sleep tonight ... think. The night time represents the sleep of death. Hallelujah, when you wake up you get to reflect on the resurrection of Jesus and your future resurrection. That's awesome.

DevoLink: Devotions to help you Link with God.
Posted by DevoLink at 3:02 AM